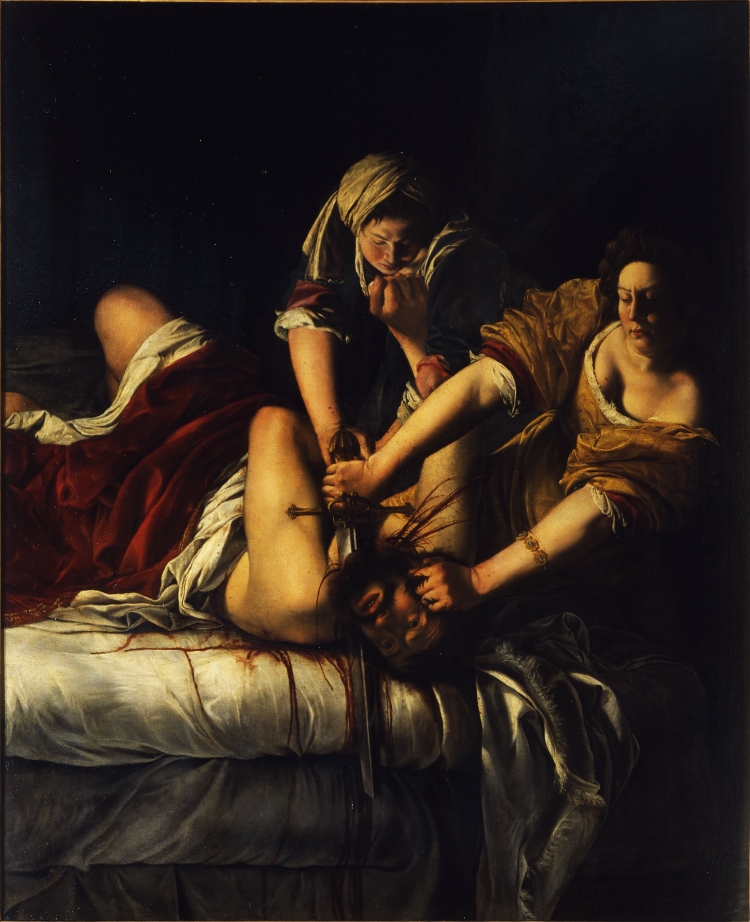 I love Judith and Holofernes paintings quite a bit. Lots of artists have done their interpretations of the scene- and most of them have been men.

The way that men typically paint Judith is either as she’s about to cut off Holoferne’s head or after, or if she’s shown actually beheading him she’s very flimsy about it. Her grip on the sword seems less than realistic, and she usually looks calm and beautiful (you know, for that pesky thing called the male gaze).

Here, we have Artemisia Gentileschi, an Italian Baroque painter, giving us her version. While I don’t think it’s been substantiated, this is seen as something of a revenge painting. Artemisia was supposed to have been raped at some point as a young woman and it could be said that this painting is her version of getting back. It certainly is a bloody scene, and much darker than many paintings.

I love how intensely Judith is in the process of beheading him (realistically decapitation is no piece of cake- you’ve got muscles, sinew, ligaments, a spine, etc. to get through) because it feels real. You can see her hand gripping the hilt of the sword while one hand is tangled in Holofernes hair so as to get a better grip. Her assistant holds him down, and his massive form is shown writhing, desperately trying to avoid the inevitable. His blood streams down the edge of the mattress and sprays un-elegantly out of the side of his neck (those arteries!). This feels legitimate. It wasn’t painted for some man to stare at as some gorgeous, poised Judith delicately saws through Holoferne’s body passively- it was created by a woman who imagines if she were actaully given the task to get Holofernes drunk and then dispatch of him. If you were a female assassin, what would you do? This.

This painting is magnificent. I wish I had known about Artemisia when I was at the Uffizi in 2009- I was much more obsessed with seeing Botticelli and Michelangelo at the time. Someday I will go and honor this wondrous woman’s creation in person properly. Until then, she has all my respect.

One thought on “You can tell a woman did this: Artemisia Gentileschi”