I grew up in a family that didn’t relish cooking. My mum is an incredible baker, whipping out apple pies, cookies, brownies, and other oven-based confections to perfection. She can cook, and I know that she and my father do more now that their spawn are out of the house. My father today makes curries, cans carrots, makes his own cider, and butchers the animals he hunts.

However, growing up, I don’t remember food being so prominent. My mother explained it in the most reasonable way when I asked her once, telling me that after getting us out the door to school, working full time, then coming home to make dinner, making dinner was a chore, not a gleeful reprieve, as I’m sure many women can attest to. I do not begrudge her this in any way, understanding and loathing the idea that women can and should have it all, including cooking skills that come out as soon as you close the office door, because you love slaving over a hot stove for hungry, picky kids.

However, my only living grandmother doesn’t cook. My remaining grandfather doesn’t either. My aunts in Connecticut cook, often reporting what they’re whipping up, but in my immediate family food is appreciated but not often lovingly made except on holidays or special occasions.

Perhaps this is why I love cooking with Logan so much. I hear stories of family members spending all day in kitchens, of special pizza ovens, of flavors and ideas I’ve never known before. Bottles of red palm oil, special coconut milks, and dende milk can be found tucked away on his shelves, things I’ve never used or known. The cuts of meat are different here in America, which I had never thought about before. He teaches me how to do ridiculously simple things like how to properly cook rice and that cooking can be a joyful, organic process. We listen to music and have a glass of wine or two and taste as we go.

My brief sojourn home was spent in his kitchen with him, helping keep odds and ends going- soaking the starch of jasmine rice, grating parmesan cheese, scraping out small meaty pumpkins, stirring onions in olive oil for flavors, helping strain broth- and whenever I play sous chef I learn.

The best dish we made this weekend was a parmigiana di melanzane, which Logan found by watching Gennaro Contaldo videos online. It. Was. AMAZING.

We picked out a beautiful, fat eggplant in the most gorgeous purple sheen at the grocery store. I had never actually handled an eggplant but it was really lovely and lighter than I expected. Logan sliced it up, beat an egg in a bowl, put flour in another, and got some oil frying, and it all began. We sipped Czech pilsners we’d picked up at a local beer and wine import shop, and a breeze came in from outside, crisp leaves on the back porch telling me that it was fall. 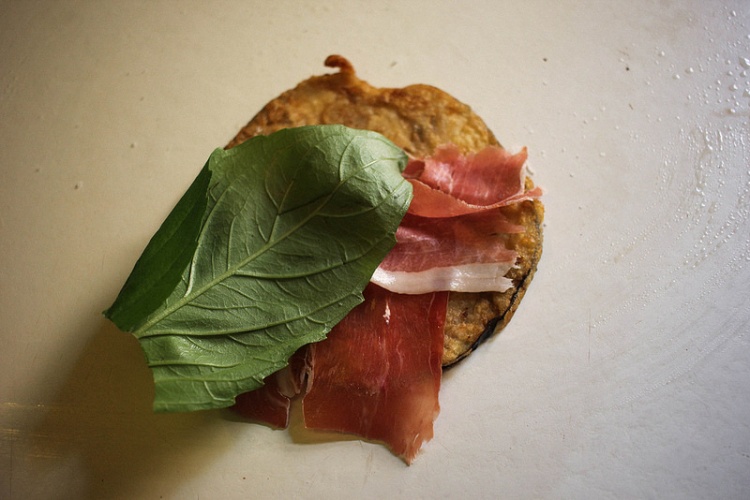 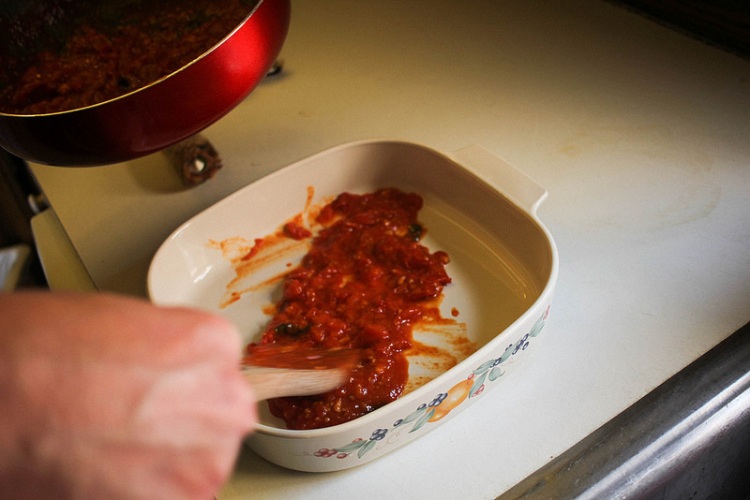 After the eggplant fried we tore pieces of prosciutto and mozzarella and basil and rolled them up inside, laying down a bed of tomato sauce in a ceramic dish and then carefully placing the rolled tubes down. Covering them in more sauce, Logan piled on more mozzarella, some parmesan, sprinkles of basil, and put it all in to bake.

Trying to describe how good it was would be a waste of English. It was rich and perfect. We were the happiest, most full creatures after we ate it. It wasn’t difficult, and it was damn delicious.