After learning about the horrific shooting at the Centre Culturel Islamique de Quebec in Quebec City, several friends and I decided to make a trip to our local mosque, Masjid Al-Imam. I have never lived in a community where a mosque was present (Montana and Italian Switzerland aren’t the most…ahem…diverse of communities). Victoria has one on Quadra Street, and it felt absolutely necessary to go, drop off flowers, cards, and letters, and spend a few minutes giving our grief and love to the Muslim community here and everywhere.

As a white, non-religious woman I have never faced religious discrimination. I have never lived in fear because of my faith. I have lived a life free of many fears that have affected others deeply. Being able to go, leave a letter and flowers, and express my sympathy and support for my Muslim neighbors and community members felt good. It’s not enough, and what we did was a tiny, tiny act, but it’s a start.

As we purchased flowers at the market, the cashier asked us who the flowers were for. We responded, “We’re taking them to the mosque!” and she replied, “Oh! That’s wonderful!”. When we got to Masjid Al-Imam, there were already gorgeous piles of flowers, letters, cards, signs, and a few lit candles, all saying that there are people who care, who love, who support. A man was outside the mosque and thanked us profusely as we deposited our flora and cards, and we shook his hand and told him thank you. It meant so much to have him recognize our attempts, as small and potentially meaningless as they were, at voicing our solidarity and resistance to hate.

I am tired of feeling useless. As my motherland descends deeper into madness, being able to physically go and pay respects and show solidarity was important. There are two vigils/meetings happening in Victoria this week to honor those whose lives were cut short by a white, violent terrorist.

It is better to remember the names of those who have passed than to remember the terrorist, so I pay my respects to Mamadou Tanou Barry, Abdelkrim Hassane, Khaled Belkacemi, Aboubaker Thabti, Azzeddine Soufiane, and Ibrahima Barry, who were praying at their mosque. I cannot even begin to comprehend how their families must feel or how their communities are grieving.

What we must do is educate ourselves in these times. We must not be ignorant, we must pay attention and stay involved. We must attend vigils, marches, read real newspapers, and be loving. We must be willing to learn, to be uncomfortable and to be open minded, even more than we might already be. Fear and darkness do not help stop such horrible things from happening. Love and support do. 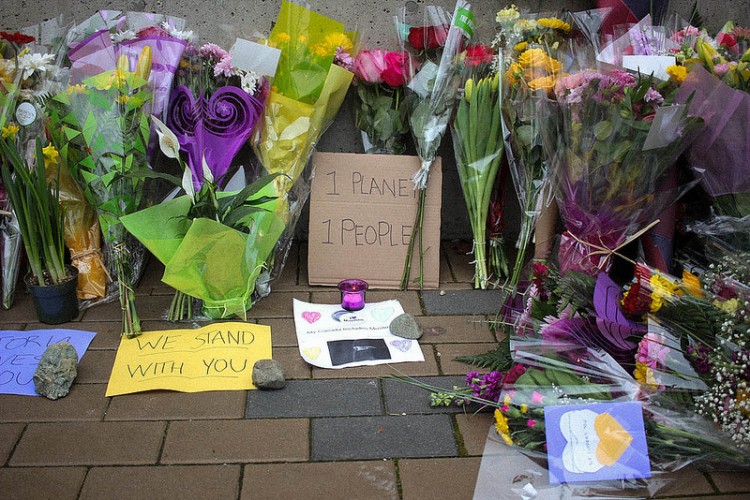 One thought on “Standing together, supporting one another.”