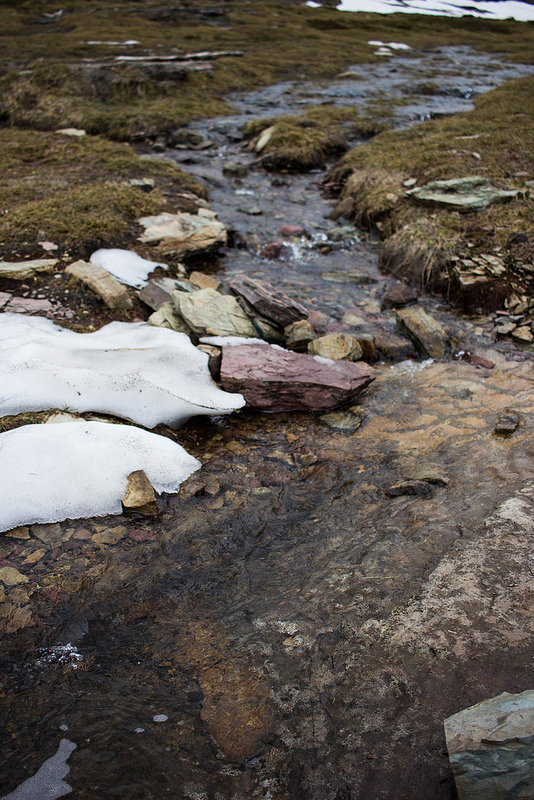 I brought two canisters of bear spray with us and put them in an easily-reachable outside pocket on my pack. A few weeks back we had met up with some friends and one of them recalled being charged by a grizzly bear on their first day backpacking in Glacier, and how they hadn’t grabbed the bear spray fast enough. Luckily, the grizzly had merely done a bluff charge and veered off into the woods, away from them.

Not my idea of a good time, I thought, so I brought more than one canister. We also packed water, sunscreen, and snacks. As we got to the Logan Pass Visitor Center I checked that we had everything and got out. The parking lot was full, and the Center was swarmed with tourists, many in flip-flops, learning about this incredible part of the world.

As we walked on a trail behind the Center, somebody noted a mother grizzly bear with two cubs in the distance. I pulled out my binoculars and peered out, seeing her calmly making her away across a grassy knoll with her two cubs in tow. It was beautiful to see them from a safe distance, where we weren’t bothering her and she wasn’t making us nervous. What I do like about bears and most other wild creatures is that they, honestly, don’t want to hang out with us either. They want to mind their own business and go about surviving, something that in many parts of the world is harder due to human encroachment and climate change. 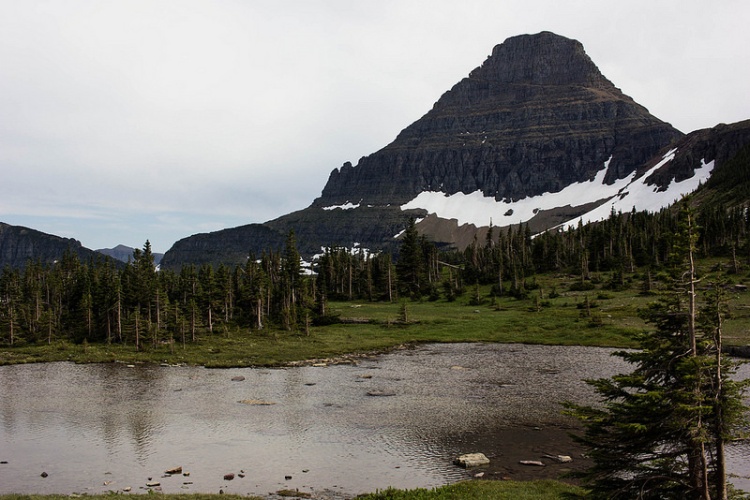 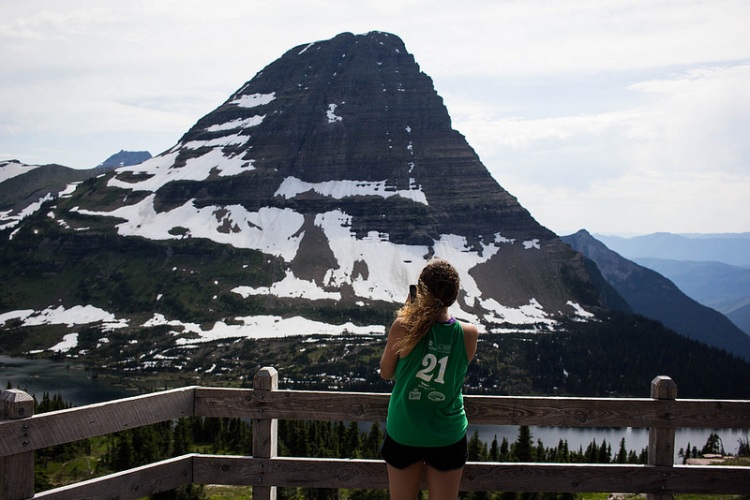 We began hiking to Hidden Lake, but part of the trail was closed due to bear activity. There were enough people on the trail that my fears of encountering bears were mostly gone. Bears have an incredible sense of smell and the number of warm human bodies out and about would waft to any living animal like a red flag, because I bet you humans stink.

As we hiked further, we encountered snow. Slushy, wet, slick snow! Logan marveled at the snow in July, and we trekked through it, trying not to slip or slide. As we hiked about a mile in, we saw our first mountain goat! We saw several more as we kept hiking. There were several on one of the boardwalks, determined to get to somewhere else, and so I moved off the boardwalk into the brush. While mountain goats aren’t massive, they’re still wild animals, and several of them had their kids with them, and I didn’t want to get in the way and cause them stress or make them nervous. It was incredible to see them so close, though, while they’re shedding their thick winter coats and looking shaggy. Their expressive faces and slow pace made it easy to stare. We get to share the world with so many natural things and as a human that makes me feel all the feels. We’re so destructive and polluting and unnatural in some ways and it’s amazing to be around things that are very different and humbling. 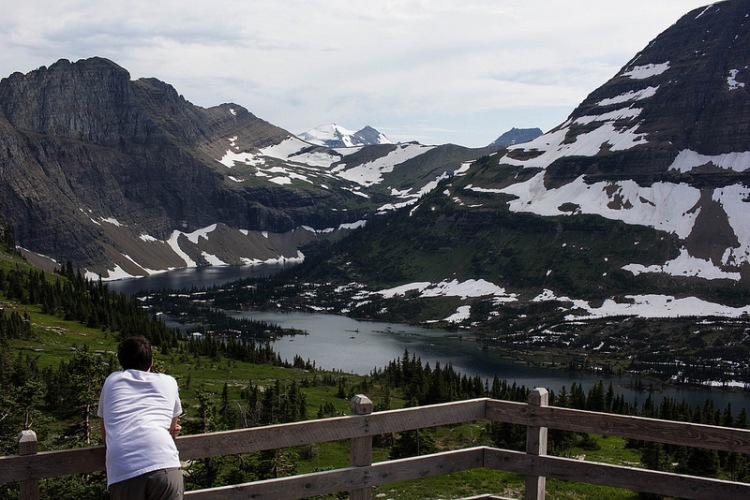 The views at the end of the trail were amazing. Lush green valleys dotted with snow laid before us, while healthy looking, proud trees stood in thick groves. The bare rock of the mountains reached towards the sky and we all looked, silently, absorbing the beauty of everything. The air was cool and fresh and it felt good to inhale and smell the natural smells. Small, delicate flowers laid by the trail, showing off purple and yellow hues. Red slate rocks added blush to the landscape.

As we headed back, my mind buzzed with questions and my heart felt full. I bounded down through the snow quickly and as we got back to the car I felt absolutely exhausted and invigorated simultaneously. 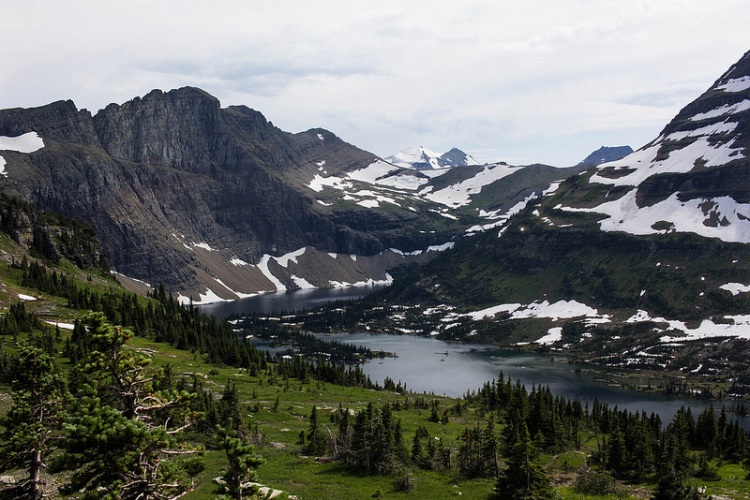 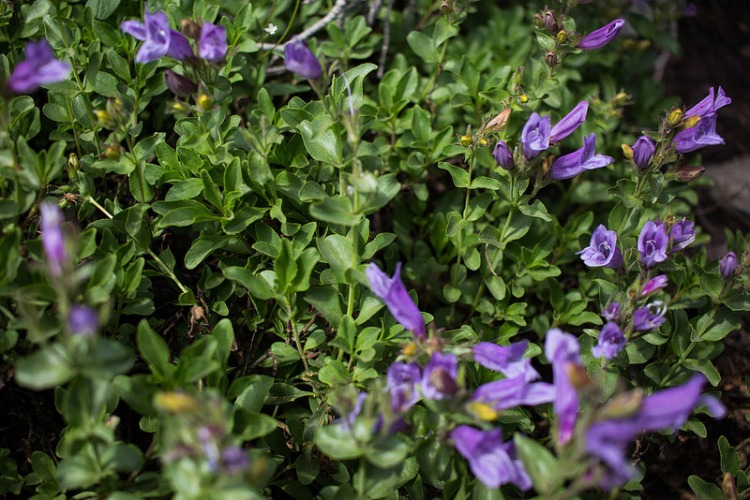 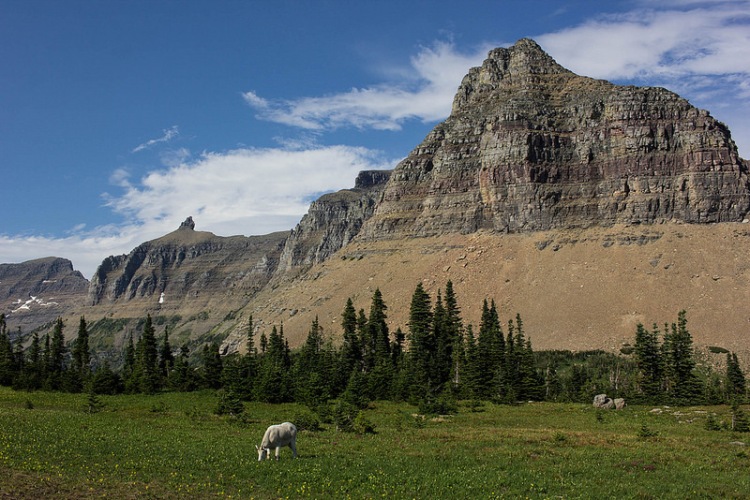