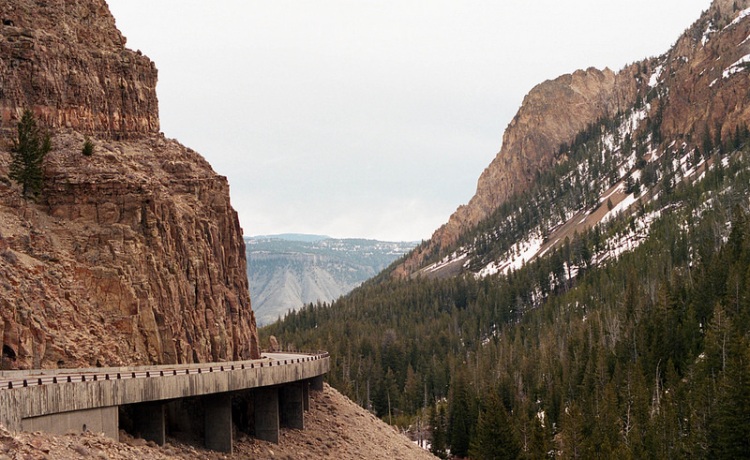 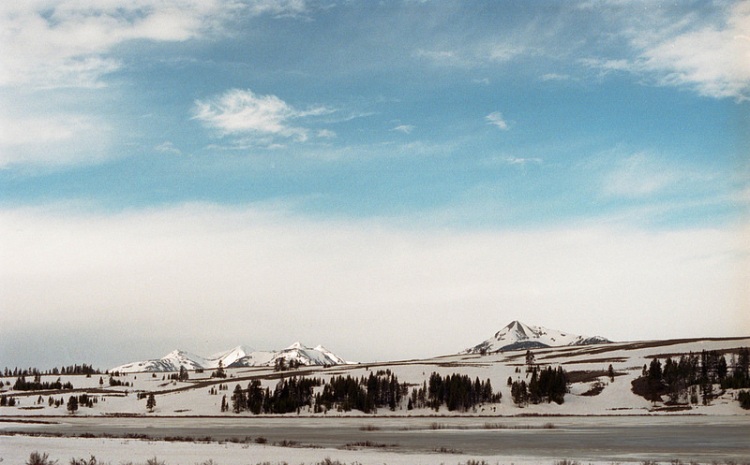 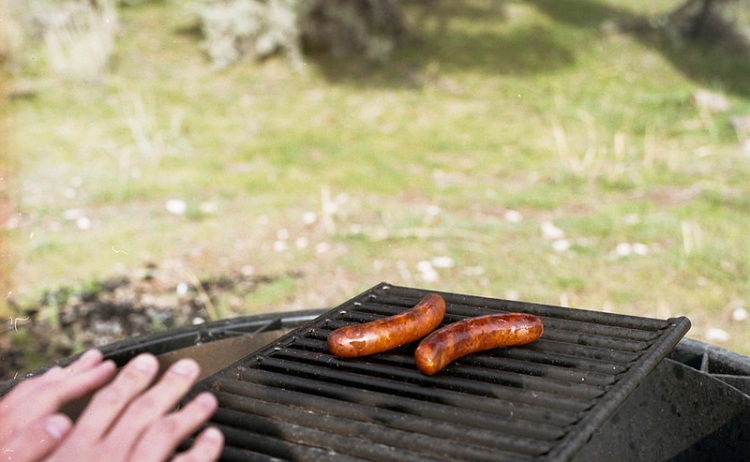 April in Yellowstone is kind of a crapshoot. You never know if you’re going to have a blizzard roll in, a bunch of hail, or a perfectly clear, beautiful evening. You could literally encounter anything- elk in your campsite, bears, unruly humans- and you have to be prepared for all those options.

We drove through Paradise Valley, past the fast-moving, brown Yellowstone River, admiring the cloud-covered peaks of the Absaroka range. We got to the Mammoth Hot Springs campground. A park ranger let us know we got the last campsite in the area (yes!!!) and we proceeded to pitch our tent on the raised platform. This was the first time we would be sleeping in our new-ish tent that we had gotten for a ridiculous steal at an REI garage sale.

After pitching our tent we drove to the terraces at Mammoth Hot Springs, and walked on the creaky boardwalks all over. The smell of sulfur belched from the ground, and there were dozens of cow elk scattered nearby, many of them pregnant. I wondered when they would be surrounded by their small, awkward calves and hoped I’d get to see some soon!

I ran into an old classmate from my Swiss college on the boardwalk as we were coming down. I hadn’t seen Heather in over seven years, and here she was! We hugged, and I shook my head in bewilderment. After attending Franklin College in Lugano, I feel so lucky to have my world be so small that I get to have experiences like that. 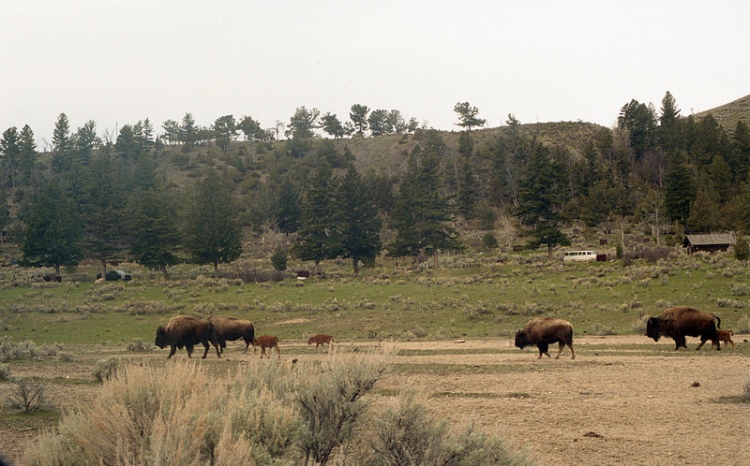 Logan and I bemoaned the stupidity we already saw visitors exhibiting. We saw women try and pet the pregnant cow elk, and behind my gritted teeth I let out a vile hope that the elk would charge or kick somebody who dared to disrespect their personal space. Red dogs, or baby bison, cavorted outside our campground, and people got way…too…close…to photograph and marvel at the tiny little devils, who were dwarfed by their much larger, scarier mothers and fathers.

Yellowstone is best before Memorial Day weekend and after Labor Day, but it was still so awful to see so many people stressing out wildlife and putting themselves in danger. I usually refuse to visit after June starts because it just gets to be too much- I tend to become enraged so often seeing the ridiculous amounts of idiocy being exhibited by humans, so I just stay away.

Regardless, it was a beautiful, sunny day. Logan and I tried to go to the Boiling River, but the river was moving so swiftly, full of run off, and there were so many people crowded in the hot spots that we decided to try again tomorrow morning before too many people were awake. This plan was ultimately foiled.

We went back to our campsite and started a fire with dry grass, newspapers, and matches. We made some hot water for tea and cooked kielbasa, and then a hard wind came down, accompanied by fat, unapologetic drops of rain. We got into the car (the tent was being blown almost vertically by the rain) and waited it out. Soon, hail pelted the car. We looked at each other and wondered if we would need to get a cheap motel in Gardiner, because if the weather kept up this way there would be no way we could sleep in our tent, even with the rain fly on and it being sturdily staked in the ground. The wind was just too much!

Luckily after about 40 minutes it all subsided, leaving us with a beautiful full moon and some fluffy, nonthreatening clouds. We spent the evening eating and sitting by the fire, having a beer or two and just chatting in the way that a fire encourages people to talk. Eventually it was time to retire, and we crept into our little green tent and nestled into our sleeping bags. I slept like a rock, not waking until about 5 am, when the birds began to serenade us and the sun began to slowly make itself known. Logan stirred, and I rolled over, wanting to sleep in but also wanting to get up and get to the Boiling River.

Finally around 7 am we got up, put on bathing suits, and headed down the road. It looked like there were no cars in the lot! Yes! Upon driving closer, we saw why: the park rangers had locked the gate, which was a sure sign that the Gardner River had been deemed too fast and dangerous to stay open for visitors. We barely missed it!

We went back to our campsite and made coffee and cooked the rest of our kielbasa for breakfast. We then decided to drive through the whole park to see what it looked like. Once we got outside Mammoth the temperature dropped rapidly, and we saw layers of snow that had been plowed off the road piled high. Mated pairs of sandhill cranes stalked in shallow streams, and we saw bison partially hidden behind curtains of billowing steam from the volcanically-heated waterways and geysers. There weren’t many people out and about, and we marveled at the sun glinting from mountain tops and how green everything was already.

On our way home, we stopped at Norris Hot Springs to soak for a bit, because we were at the bare minimum going to get to soak in at least one hot spot! Red-winged blackbirds and yellow-headed blackbirds and mountain bluebirds trilled and called from the marshland around the hot spring, and we let ourselves relax. We shouldn’t have- as I drove over the mountain pass that lies before Butte, a freak snowstorm swept over us. Massive amounts of snow were falling, and the road was quickly getting full of slow-moving, careful cars. The heat in our car gave out, and I had to ask Logan to wipe the inside windshield so that it wouldn’t freeze up and block my vision. It was late April, and we were in the middle of a fucking blizzard?! I cursed my way over the pass, knowing that as long as we went slowly and carefully we could make it to the other side.

Eventually we did! It was quite a journey. We got home after 10 hours in the car in one day and collapsed in our beds. It’s always an adventure going to Yellowstone, no matter what you expect will happen.