About two weeks ago I finally got a roll of film from my Pentax K1000 developed. It was from when we first moved here, in late December or early January. As I scanned the negatives I felt like the photos quietly sitting, wrapped around the spool in the roll, were taken yesterday. Logan with shorter hair (has it been that long?) up in Rocklands, where we looked out over a grey winter sea and wondered how everything would pan out up here for the two of us.

2020 is a halcyon year, un-tethered to everything we know. I know, that’s an understatement, and everybody has been pondering their own version of “what the actual fuck is 2020” but mine is both slightly bitter and yet incredibly grateful for the luck and the timing.

We moved here months before the island shut down, but not that many months. We have an apartment that is on the affordable-ish side (as close to affordable can be in Victoria!), and somehow I managed to wrangle myself into a full time job that pays horribly but is pandemic-proof, so money is regular and we can budget to keep ourselves with a roof over our head. I apply for other jobs often, because what I really want to do is write or photograph for a living, but not worrying about unemployment is a big burden off my mind. Luck and serendipity, with a dash of determination to get here, because it was where we wanted to be, even if at work things are hard and my body is tired and bruised. 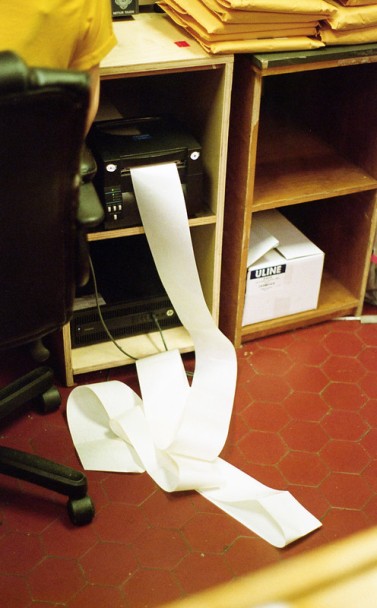 I sold Logan’s old Buick before we came up here, so we are car-less folks, with two bikes to get around on. A few weekends back we sprung for a rental car for a night to go camping and sleep in our tent, my first camping trip in British Columbia. It required some learning on my part. I thought I had pretty dialed in fire-starting skills! The wet BC firewood proved me wrong. It took over an hour for both of us to get a spluttering, unwilling flame to consistently keep us company. A resentful fire didn’t stop us from enjoying the woods though.

It was Logan’s first time in the woods around here. It was my first time in almost three years being back. I forgot how dense, damp, and pungent they were, the smell of soil efficiently converting decaying matter into fertilizer, saplings battling one another on a tree stump, the lofty calls of birds from trees incredibly tall, wide, and regal. We woke up to the sound of a barred owl, unmistakable, with it’s typical “who-cooks-for-you”, although at 4 am I was less appreciative than I could have been. Back home in Montana meadowlarks start to sing this early too, and I miss their warbling call fiercely. 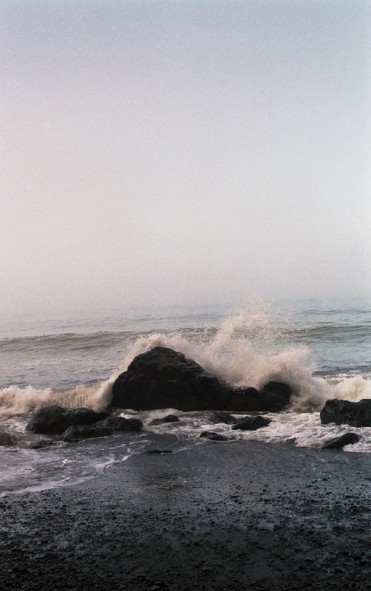 We got up early, cleaned up the campsite (Leave No Trace y’all!) and headed to the Mystic Beach trail. We got lucky- nobody else was on the trail, and I greedily drank in the sights, smells, and touch. The slight squelch of mud on the trail, the light streaming in the way it does in Gothic cathedrals in Europe (forests are known as North America’s churches for a reason), basking in the velvety qualities of the sun and the moss and the ferns. There is nothing like being on an empty stretch of trail in the woods.

There was a heavy mist on the beach that filtered into the forest. The sea was so loud, cascading incredibly amounts of water up and over and up and over and onto the beach again and again, the salt heavy in the thick morning air. We steered clear of the areas near people who slept on the beach in their tents, and marveled at the scenery. A Romantic painter in the mid-1800s could have hardly done the scene justice, and my film camera didn’t either. The array of colors, subdued and made softer by the mist, was gorgeous. Everything felt cloaked, slightly mysterious, and a little more wild. People who were starting the Juan de Fuca trail walked past us and I mentally wished them well. Maybe someday we’ll have the gear and the strength to do it ourselves! 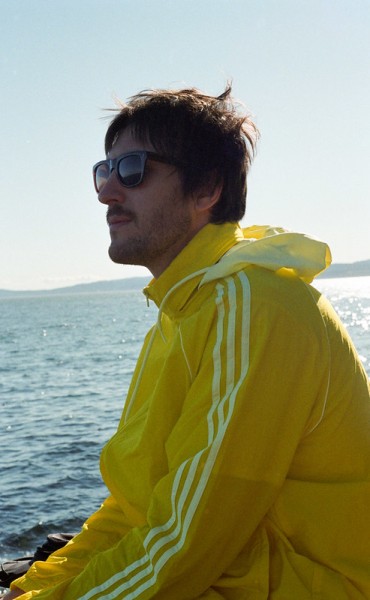 Lately I’ve been re-watching anything that Anthony Bourdain did. If you’re going to weather a pandemic trying to be inside, you may as well let your mind wander, and nobody takes you around the world and makes your stomach rumble like he did. The world is a less interesting and loving place without him in it. His curiosity was not burdened with ego or ideas of superiority over any culture, food, or place. Rewatching the episode of his Layover series in São Paulo took me right back to getting to eat at Mocotó last January, eating the calf-foot soup that gave the restaurant it’s name. I remembered the gelatinous, rich texture from the cartilage and fat in the soup, the salt, the amazing flavor. Pretty good for a Sunday night inside, right? Thinking about a meal that you loved, in a place so utterly different from your own, eating a meal that Bourdain himself praised for all the right reasons?

One thing I haven’t done in some time is make the self portraits that have documented my times here. My grandfather’s death, seeing an otter family, celebrating our good fortune, grappling with the loneliness of getting through all of this- I am trying to build a visual record of how I felt and the serendipity of early mornings. Over the years as a photographer I rarely was the subject. Now that I’ve got more time and privacy I can do those things but I haven’t had the energy lately. Some black and white film came in the mail and I really want to do a series about hands.

Anyway, at the end of the day I hope that even if you are human and allow a tinge of despair or melancholia to infect you, keep your chin up. Wear a mask. Be kind. Go touch trees and listen to bird songs and breathe.