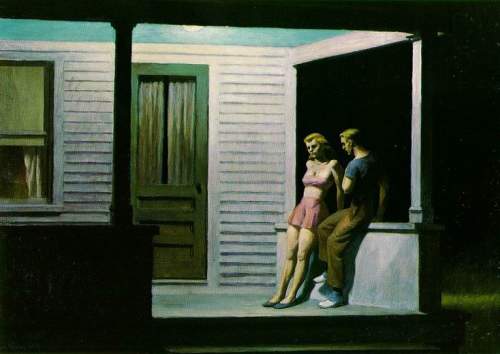 These days the way things are going it’s hard to wake up and see the future in a positive light. Every day I wake up, already paralyzed by my college debt; in many ways, I wish I had chosen a more economical school to attend. Yet, on the other hand, I look at all the things I accomplished there, and I feel it was worth it.

I want to live in a place where I don’t have to be frozen by my educational choice, where second guessing is an option. Where if I wanted to change majors, I could without being afriad that the increase of debt would make it even harder than it already is on my family.

I’ve sold my life insurance for school. I’ve worked two jobs for several years each summer. I’ve been lucky to be able to go to college in the first place. However, I think more people deserve to feel secure in their futures. To me, America needs to figure out a way to make college and higher education less of a life sentence with debt. America needs to make a secure safety net for those of us who decide to “fail”- whether that failure be leaving a job, switching majors, starting to go to school again, or moving. We deserve more than the cold hard bite of rock bottom to greet us.

I feel cheated. I feel tricked. I feel like America runs with a Constitution covered in clauses and asterisks, begging us to find our way out of a labyrinth of reason. We’ve got high unemployment, major wealth disparities, a terrible health care system that is run by the money-sucking pharmaceutical companies and their love of profit, and we’ve got the wealthy not being taxed to their ability.

To the wealthy, I have many…shall we say, choice words. Honestly, though, if you’re wealthy and you live in America, you’ve gotten wealthy as a result of America. So, you pay your dues. Pay your fucking taxes, and don’t whine about increases. Give back. You made a profit here, give us a good chunk of it; you won’t be on food stamps by any means. Our roads are terrible, our unemployment is running out, our seniors are constantly worried about Medicare and Medicaid being hacked to bits, not to mention Social Security. Our unions are weaker than ever, and our people are growing unhappy. The Tea Party, God bless their addled brains, have somehow managed to gather a large group of loud, crazy people to start a fire, and the Republicans have all agreed on one thing: Obama bad, we good.  The Democrats are running with their tails between their legs, unsure of where their loyalty (or their opinions) lie. The only sure thing is that we’re in a pickle.

America needs to get a face-lift, a tummy tuck (pun on American rates of obesity?) and to go on a diet. We need to live within our means, and we all need to give back. As a member of the middle class, I almost think I deserve to be labeled as a Threatened Species; one that is quickly disappearing in America, while still taking most of the tax load. The rich need to suck it up; they’ve only been getting richer. They control more wealth than ever, and trickle-down economics has been bullshit from the start.

Americans need to get education back on track. We need to be able to raise an army; an army of educators that are prepared to do battle against terrible test scores and lagging education reform. Our teachers should be allowed to be more creative in the classrooms. My most creative, unorthodox, and brilliant teacher, Mr. Neiffer, has to this day always been a beacon for what education should be: a mix of zany, but memorable, teaching methods, letting the students work outside the box, and then making sure we can still work with the information we have been given. It doesn’t hurt that we were allowed to dress up as our favorite dictators and bring torches into class to hand-fire creme brulee. Mr. Neiffer did everything 100%, and let us have a say in what we wanted to study (if I recall, my morbid classmates and I decided upon an extra special dose of Black Plague goodness, Extended Version).

America needs to figure out how to make sure that ALL of our citizens are given access to affordable healthcare. EVERY. SINGLE. ONE. By not giving every citizen the chance to get affordable healthcare, America is making a statement that we don’t care if you die; weed out the weak, you might say. Can’t afford that ambulance ride to the hospital because you think you’re having a stroke? Wait until you’re really sure that you’re having a stroke; it’s expensive to think there’s a clot in your brain when you’re not sure. Best to wait until half your body becomes paralyzed. Got kidney failure? Well, shit, dialysis is expensive, you better be covered. Oh wait, you’re not? Let’s pull a Rick Perry and tell you it’s your own fault for not having insurance. Stupid American. Better yet: got lupus? Need to get started on some medications that might limit your immune system attacking itself? Oops- hold your horses. You’re not doing ANYTHING yet, because the drugs you need are “experimental”. Despite the fact that there’s no cure for lupus, so everything is experimental. Yeah, have fun paying hundreds a month for meds. Love, your health insurance company (insert name here).

Want to go to college? Want to become so deeply in debt that you’ll die making payments to Sallie Mae? If you don’t, you better be a valedictorian or salutatorian. If you’re not, you’re screwed. Even better, the New York Times declared that the graduate degree is the new bachelors, so good luck finding a job after four years of college. Can’t find enough scholarships to lighten the load? I’m sure your school has a generous work-study program. By generous I mean about $1,500 a semester. Still not enough? Do what all the cool kids do: sell plasma! Yes, sell some liquid from your body for money! Go hook up to a machine and let it take out your blood, strip it of plasma, and return it, all in one hour!

This is the most bitter post I have written yet. Yet, I feel more nervous than bitter. Nobody has forced me to be where I am at; I’ve made my own choices. I’ll accept my debt and my responsibility to pay it back. Yet, I can’t help but feel jipped by the system, somewhere along the line. I want change. I don’t know who or what the catalyst for change is going to be, but I know I want it. Who knows, maybe one of these days I’ll get riled up enough to not just sit here and type about it. The people in this country deserve to see brighter days; they deserve to feel safe taking risks, they deserve to be allowed to fail and get back up, and they deserve to be healthy and educated. Granted, I’m not an economist, or a business major, or a poli-sci major; I’m an Art History major going to a large American university. But, when I look at all the zeros that I’m in debt, I feel I deserve to be able to give my opinion. Hell, I’m paying for it.